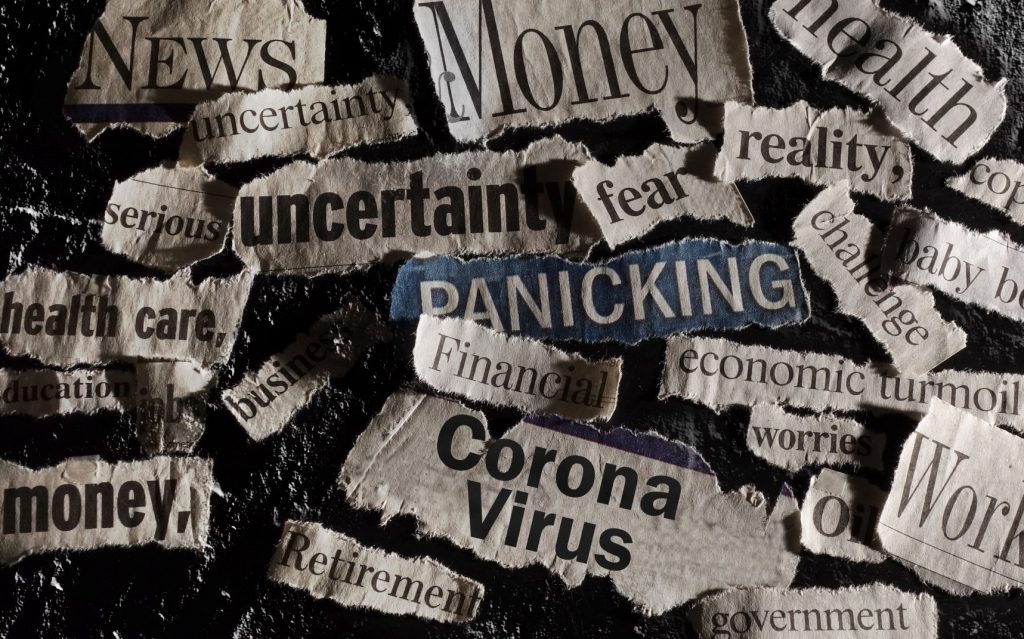 I wanted to get you to consider something. Because I think it’s quite easy to blame the media for creating the fear and the panic. I think it’s fair to say you get a lot of different facts in a lot of different media outlets. But there’s probably not that fair, if we’re honest. I certainly think there’s been some sensationalism, and some soundbites, and some headlines.

I think much of the fear and the panic has actually not being created by the media but by social media. And I want you just to consider that. I’ve told you very openly a good couple of weeks ago, if you follow me, that if I have anyone on social media, that I’m following, and they blurt their opinion as fact on what’s going on with this virus and what everyone should do, then they’re getting unfollowed. I don’t announce it. I don’t make a song and a dance about it. I don’t out them about it. I just generally press the unfollow button.

Everyone has an opinion. And that’s okay. I respect everyone’s opinion. But be careful not to take opinion as fact. I usually follow a lot of people. Now I’m following less. I’m following the ones that I respect their opinion. I think their opinion suits what I want to do. One or 2 people might unfollow me. They may feel that I’m being naive, because I’m trying to be positive. Because I’m trying to give good energy and enthusiasm. I’m trying to solve problems. I’m trying to create new products and services and solutions. I’m trying to maybe pivot, look how I can serve my market even better. Maybe, even disrupt and reinvent my own business model. Maybe, look at ways that I could not just survive, but thrive in the industry that I’m in. If someone doesn’t like that opinion, then they’re more than welcome to unfollow me.

But I think it’s vital that you inoculate yourself from distraction, from opinion, from bad energy and negativity. Sometimes facts are facts. If facts are facts, and they’re not nice, then fair enough. But so many people are out there saying, oh, you’ve got to cancel all events. When the Government have told us NOT TO. And it’s only for them to cancel events. And how many of these people have got Medical Degrees. I was having a chat with a good friend of mine this morning about that.

Actually, I think it’s easy to bash the media. I’ve seen some sensationally stuff. I’m like whoa, come on. So, I can be a bit of a critic of the general media. But to be fair, it’s worse on social media. So, my opinion, is that, you’ve got to think about what’s best for you, your mindset, energy, enthusiasm, service, solutions. For you to make the best of this situation, whatever helps you to make the best of this situation, for yourself, your family, clients, followers, fans, that’s I believe what you should immerse yourself in. Whatever doesn’t help you, all your clients, followers, fans or loved ones in this situation, unfollow, block, ignore.

But man, social media that has created the biggest storm than any media. Let’s be honest. I mean look, if it was deadly serious, it’d actually be good, because it’d wall us in advance. But if it ends up being a relative storm in a teacup, of course, it leaks and creates way more fear and panic. So, that’s my opinion on what is worse, what’s created more panic or scaremongering or fear than the media.

Social media is great. You follow great people. You learn great stuff. And you get a lot of that information for free. You can connect with people globally. But this weekend was probably the apex of the depression. And I couldn’t even go on social media to make a comment in my own communities without seeing all sorts of theories, and conspiracy theories, fear, panic and negativity. You know what? If it’s serious, it’s serious.

Just interestingly, this was completely serendipitous, but this morning, an episode went out on my podcast called, How To Reinvent Yourself. So, I did an episode, a deep dive. I pre-recorded this probably 3 months ago, because I said, didn’t I earlier on this year, that the theme for me for this year, was, reinvention. Last year was growth. This year is reinvention. And this theme I put out there, before the virus. I probably should be careful what I wish for.

But I did a whole episode on How To Reinvent Yourself. And I think it’s the time to reinvent yourself. It’s the quick and the dead, maybe. And if you’re green, you grow. If you’re ripe, you rot. So, maybe, this is a great opportunity to reinvent yourself. Maybe, a way that you’ve needed for a while. Maybe, you’ve got a bit lazy, complacent. Or, maybe, you just haven’t had the commitment and the energy required. You’ve been sat on the fence. You’ve been not sure what to do. It’s time to be decisive to act fast.

Many of the biggest companies in the world are born in the recession. Coca-Cola was medicinal. Then of course, they became soft drink. Post-It Note was a failed glue. Kellogg’s cornflakes, that was a sort of an accident. Kodak and Blockbuster, they didn’t reinvent themselves even though they designed the thing that now others do better than them.

So, reinvent yourself, or maybe you die out. So, NOW IS YOUR TIME, my friends. If I can help you in any way, please let me know. Please, please tag me in and put any questions in the comments below.

Yeah, Nan has just mentioned here about the elderly, of course. We need to look after them. I had this horrific dream that my dad was playing pool with some of his friends, and they’re all a bit older than my dad is now. He’s in his mid 70s. He’d got beaten, and he got upset, because he can’t see properly or hear properly, or he couldn’t in the dream. I got really angry with his friends, and I had a go at them all. Then I started balling my eyes out. I just woke up, having balled my eyes out at my dad’s frailties. I’m going to go and see him today.

Of course, I said to a couple of people close to me, my business partner, MD that I want to be careful, because I am committing myself to working extra, and doing what needs to be done. But I want to be careful, I don’t do that at the cost of friendships and relationships. At the same time, I don’t just want to sit in the house all day, every day with friends and family, but not be productive, and not be proactive and energetic. So, it’s probably a bit of a balance of both.

I’m going on this sort of charm offensive of hopefully giving you my opinion, which could be productive and useful for you, your clients, your followers, your fans, to hopefully raise the energy, because the energy of the globe is lower at the moment. We need to lift that energy and that vibration and that spirit back up, because when you’re in a bit of fear and panic, you can freeze. When you freeze, you don’t do anything.

Also, you could let your mind, your emotions spiral you down. Oh, what if this happens? What if that happens? Going to doomsday scenario mode, which your brain tends to trick you into doing, because it’s a survival thing.