Tips and Tricks To Becoming A Millionaire 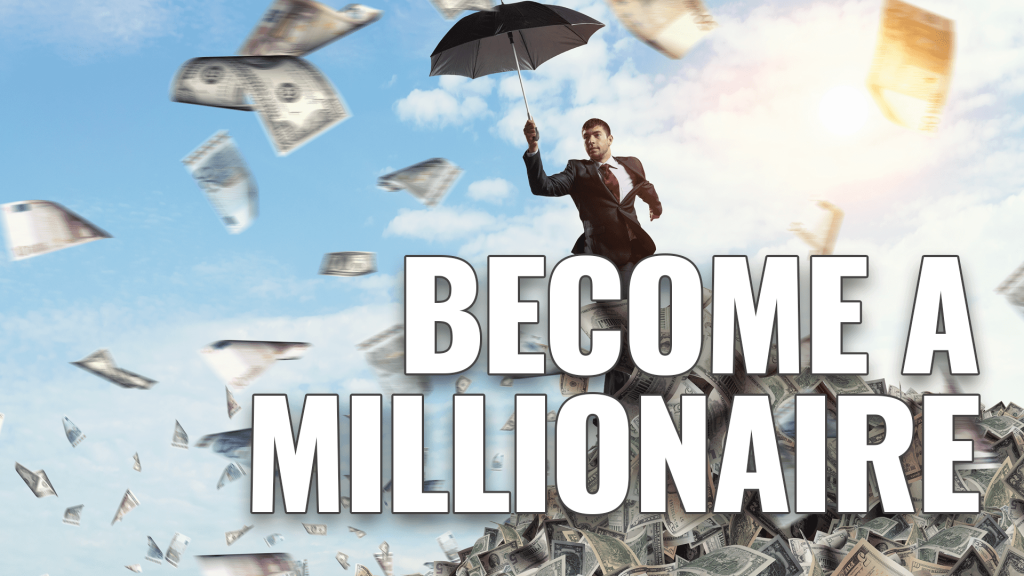 What’s the real TRUTH about being a millionaire? Have you ever thought about this question, closed your eyes and idolised of having millions in the bank?

Just because someone may have buckets of cash in their bank, doesn’t necessarily mean their lifestyle aligns with their extended zeros! You only have to look at Warren Buffett (one of the richest men in the world, who still lives in the same house & drives the same car!) and see the frugal life he lives. And that’s ok.

You see there are many myths about being a millionaire, how they live, what they do and what sets them apart from the rest. But it’s also important to remember being a millionaire won’t happen overnight. It takes smart work, leverage, having confidence, vision and the ability to manage money to name a few. I know many have the vision of getting to millionaire status overnight and joining the ‘millionaire club’ one day so I’m happy to share my story on the topic.

Are you ready to learn the REAL TRUTH of being a millionaire? You may be surprised by what I have to say, so here goes..

Millionaires find a problem, or an area that needs disrupting, they add value, they create and produce the solution. I’ve studied 100 millionaires and know a handful of billionaires and the commonalities of them all is they find a problem that mass people need solving that they can solve and scale so that they can make millions. Take Richard Branson who is famous for finding failing businesses and turning them around and fixing a problem – getting rewarded for doing so. I interviewed Naveen Jain ($8billion net worth) for my podcast who said if you focus solely on money you will never be rich, instead if you focus on helping as many people as you possibly can, not only will your work feel rewarding, you will get paid very handsomely for doing so. Focus on adding as much value to as many people’s lives, and you will get paid for doing so.

3. It takes 3-5 years (could be more or less) to become a millionaire.

There are probably 10 or 20 years worth of work before the millionaire story that you heard about. I failed many times before becoming a millionaire and I say that humbly. I see a lot of people looking for the quick fix, the shortest way, the ‘get rich quick’ type of fads which never work in my opinion, so you have to get REAL in your approach. And ignore all the noise. It will take a lot of long nights and hard work at the start, it won’t be easy, but as long as you have grit and you protect the downside & have the correct business model, you will get there in the end.

4. Money is the RESULT

Yes many people love the money part, but it’s not always about the money. Do you think Richard Branson and Warren Buffett still need to ‘work’? Of course not. To them their vision is bigger than money itself. They want to grow their empire and achieve a BIGGER goal, they want to create new solutions to new problems, they want to feel alive and do meaningful work which helps society. They see a problem as a gift which enables them to create a solution that helps others, builds their self worth (and their net worth). Their value goes up the bigger problem they solve. They therefore enjoy the opportunity, journey and the process. They might not necessarily love every minute of it, but the rewards are greater at the end than not having had the problem in the first place.

A £70k salary would probably get you a £250k mortgage, & living in a big house, with a Range Rover and having a few kids at private school and your money is pretty much gone. People need a reality check as a £75k pay-check certainly doesn’t allow for a lavish lifestyle. Nowadays, any person with an income of less than 6 figures and a family need to rethink their priorities if they think that will be enough. If you’re doing the thing that you want to do, you’ll want to probably keep doing it and that requires a substantial income if you’re looking at the higher end of living your life.

No millionaire did it on their own. They all had a good team, culture and vision. You need to work smarter not harder, learn how to leverage and find your IGT tasks. Steve Jobs instilled in Mark Zuckerberg to move away from the day to day operations if facebook was to have any chance of great world success. Steve advised him on building a great management team which was later implemented to make facebook one of the biggest and the most used social media platforms on the planet today.Ed Roberts took Bill Gates under his wing. During his time working for Roberts, Gates was inspired to create Microsoft after Roberts’ personal computer idea got his ‘juices flowing’.Andre Agassi was playing very poorly after the breakup of his marriage & the difference in Agassi’s life both on and off the court was made by his mentor, Tony Robbins. With Tony’s help, Agassi set new standards for himself, and took his Tennis game to a whole new level.James Caan has personally mentored us, and it was worth 50 times the investment we made and paid. A wealthy yet new investor (10 properties) paid a high 5 figure sum to fly Mark and I out to Grand Cayman for a 2 day Mentorship. He’s now a multi-millionaire.All the best chefs you see on TV have served under a better one. Luis Suarez has credited Steven Gerrard as his mentor at Liverpool, and he’s scored way more goals than anyone elseYou probably could become a ‘millionaire’ without mentors, mentorships, courses and networks, but it will take years longer on your own.You don’t know what you don’t know, right? So you have two choices: You can blaze the trail and discover every new mistake yourself, or be guided down the well trodden path; paying in time and fees, but paying much less in costs and mistakes

1. You have to work hard enough not to have to work hard & set to forget, while setting up 2. But as you do, you need to build systems, processes, software, automation & teams around you
3. You need to make yourself redundant not reliant (it is the ‘hard work’ myth that keeps people working on not in their enterprise)4. You work hard to build assets, not earnings. Assets give you passive income. Systems manage assets. 5. You still need to monitor assets, but that can also be systemised/outsourced 6. Your highest value (non) task is setting a clear vision & inspiring people around you to help you towards that vision (& that’s the easiest (non) hard work their is). Books, property, information, IP, songs, movies. licenses, audios & DVDs, eCommerce platforms & sites, stocks, companies that you no longer work as an employee in, patents etc are all assets. If you stop spending & wasting your time working 80 hours a week & wearing it like a badge of honour and glory, & start investing your time, putting your time into building assets (& yes you work ‘hard’ at the start, but more importantly ‘smart’) then you get residual, ongoing return on your time in the form of passive income.

7. What they LEARN is as vital as what they EARN

You are your greatest assets, the more you learn the more you earn and you need to invest in yourself to be successful. Value education, experience, mentorship and people as much as you value the millions. Why do you think Warren Buffett spends most of his day reading and only makes a handful of investments a year? Invest in yourself wisely, and pay yourself the best interest. The more you learn, the more you earn. Your money can only grow at the speed you grow. Commit to investing in yourself. You are worth it. If you don’t value yourself, why would anyone else?

If you have a shop, and the sales are what you sell to the customer in the shop, then marketing is getting them in the shop in the first place. You can’t sell anything to no one, therefore marketing is the single most important function of a business. Marketing is money. Some of the greatest artists that ever lived were not the necessarily the greatest technicians of art, but an elegant combination of technical, brand and marketing skills.Due to the Internet, social media and a more mobile culture, becoming your own marketeer is more important than ever

9. Most are now self-made

10. Millionaires are HUNGRY to learn

They either Grow. Adapt. Or die. Innovators must look to solve meaningful problems and gain fair profit. They disrupt themselves and their industry and want to solve the problems of others. The big change makers are breaking moulds and barriers and connecting the globe, solving meaningful problems. People are looking for their problems to be solved, pains to be alleviated, and for things to be made faster, easier and better for them. Time is a scarce resource and most valuable commodity, so anything that leverages or preserves it will hold value that is convertible into cash. If you’re ever struggling financially or emotionally yourself, look more at how you can serve others and solve their problems, and more money will flow to you

11. There’s no one strategy to success

There is no single strategy that makes millionaires. There’s a variety of millionaires from a variety of industries. Slade make £500,000 each year with their xmas no.1. Paul Brown made $13million from the patent on the valve that holds upside down Ketchup in. Lonnie Johnson got $73million in royalties in 5 years from Hasbro for the super soaker . Paulo Coelho has been earning on The Alchemist since 1988, getting his share of 65 million of sales ever since. Virtually anything can be monetised. There was a day when water was free. It’s abundantly available. Now, bottled water generates $60 billion in annual sales. Someone took what was abundantly free and charged for it! They are even selling air from abroad in Japan now. Those little yellow smiley faces are a $500 million industry. The slinky generated $250 million! Slap bracelets pull in $8 million a year and 40 million units of the Furby were sold. What you work on, works. Where focus goes, energy flows and results grow.