Why I LOVE My Haters 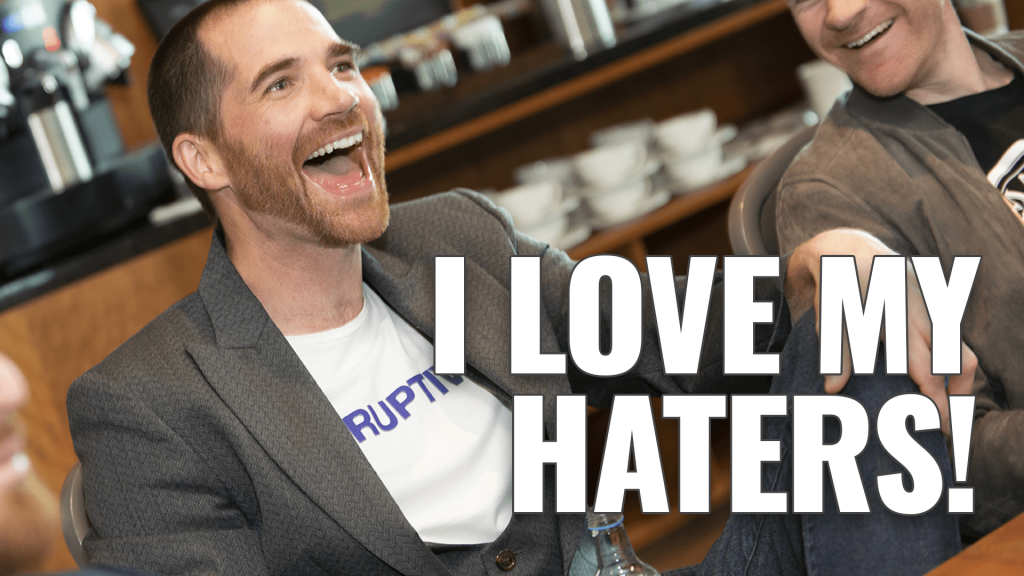 People often message me, really concerned because a critic or hater has said some sh*t about me. By all means let me know, but please, please don’t offer me your sympathy…

Congratulate me and let’s celebrate. Raise a glass because I f*cking love my critics & haters. I love reading all their thoughtful comments. I love their creativity. I love their energy. I love being their therapeutic release. I love allow them to express their repressions and allow them to be heard when no one else will listen. I love the community my trolls and I are building together.

If you worry too much about what others think of you, you are minimising your vision & focus, and diluting the very thing that inspires you the most. If you constantly subordinate your inspired plan to reduce conflict or negativity, you end up serving someone else’s plan.

Someone else’s opinion of you, your actions or your vision is simply a projected perception filtered through their own world view. It makes them no more or less right than you, and their vocalised opposition & rejection complex of you is nothing about you but a reflection of their highest values & beliefs.

Accept the challengers as much as the supporters.

Where would I be without my favourite w*nkers?

My only regret is I don’t have more of them to play with. If you know of any, please introduce us, and let us start our beautiful relationship together because:

2. They’ve got another 55 years+ to put up with me, so they better f*cking get used i to it

I’m a believer that criticism ideally in the form of critical feedback is vital for growth. What I am not saying, is, always be nice. Always treat others as how you would want to be treated. I think that is a nice way to live your life. But this is not the message.

But I just want to warn you, that if you spent time and energy criticising others, if you criticise others to elevate yourself, you are going to get exactly that back and more.

I believe that the world is a mirror. The energy, information, conversation and the marketing that you put out, will reflect directly back as a mirror to you. If criticise others, others will criticise you. If you lash out to others, others will lash out at you, and the world will be a mirror. Whereas, if you focus on your own business, your own brand, your own mission, and your own message, and you put that out to the world, you’re going to attract the people that are attracted to that message.

While you may struggle with rejection, others find it easy – learn from them

As with all skills and traits in life, there are those who find it difficult and others who find it easy. The same is true for rejection! There are many people out there who have learned to embrace, appreciate and learn from the negative feedback and rejection they receive. You can seek them out and learn from them, to become better by adopting the same tactics and strategies as they have.

How can you deal with trolls and criticism?

Here’s a tough fact to swallow: the more successful you are, the more hate you’ll get.

Don’t worry – you’ll get love too – but it’s the haters, the trolls, the critics and the green-eyed jealousy monsters who can be the toughest to handle. They’re the ones who often have the power to ruin your day and sometimes even keep you awake at night, when you’ll wonder if you really are a terrible person, a bad entrepreneur, or incompetent, or unqualified, or any of the other things you might be accused of, either online or to your face.

Critics are, unfortunately, unavoidable, particularly if you are blessed with a certain degree of success. They will have a range of reasons for taking aim and firing at you, and at times there will be something you can learn from their complaints, and at other times you will just have to suck it up, soldier, and find a way of coping.

Coping is what I want to try and help you with today, when I will look at how I pursued self-improvement and learned to deal with my critics, and hopefully how you can too.

One thing I have said before is that if you don’t have any critics or trolls, you probably aren’t doing well enough yet. In many ways, you can see these haters as evidence that you are doing something right, because quite often when people attack a person in a vicious, unprovoked manner, it’s because they feel threatened. They recognise that you are succeeding in something and want to try and bring you down, or take a dent out of your success.

It’s your responsibility to stop this happening, but in a way that proves what an empowered, rational, reasonable entrepreneur you are rather than making you appear petty or bitter.